Mediating transitions: Local radio and the negotiations of citizenship in rural Nepal

Within the last decades, Nepal has experienced significant political, socio-economic, cultural and technological changes. Two succeeding people’s movements in 1990 and 2006 respectively broke with centuries of systemic caste-based discrimination and paved the way for the entry of independent media and new actors in civil society, backed up by newly granted civil rights and freedom of speech. In the context of such significant changes this thesis sets out to examine how notions of citizenship are negotiated by means of local radio in rural Nepal. With a focus on poor and marginalised people (PAMP), this thesis examines how PAMP engage with local radio to negotiate and articulate everyday practices of citizenship. On the basis of data obtained through a mixed methodological approach (qualitative interviews and quantitative survey) over a two-year period (2009-2010), this study reveals the intricate complexities of the transitions taking place in contemporary Nepal. In particular, the study shows how PAMP in rural Nepal are experiencing simultaneous multiple transitions (from war to peace, autocracy to democracy and from subjects to citizens) and critically presents in detail the ways and extent to which local radio is appropriated by PAMP to negotiate, articulate and shape the emerging experiences and aspirations with different notions of citizenship. By focusing on citizenship and being a citizen as a produced and negotiated notion that goes beyond the commonly used de jure framework, this study contributes with insights on how local radio has helped to shed light on local spaces of decision-making and influence, as well as the subtle and much more incremental acts that increase PAMP’s room for manoeuvre in times of political transition. Overall, the thesis provides a contextually informed empirical basis for critiquing the prevailing ‘media optimism’ that tends to predominate discourses about the relationship between media and processes of social change in post-conflict societies. 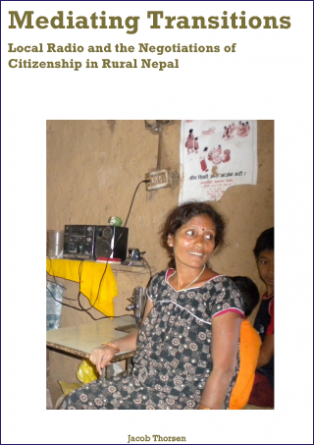