The Half Double mission: Project Half Double has a clear mission. We want to succeed in finding a project methodology that can increase the success rate of our projects while increasing the development speed of new products and services. We are convinced that by doing so we can strengthen the competitiveness of Denmark and play an important role in the battle for jobs and future welfare.

The Half Double project journey: It all began in May 2013 when we asked ourselves: How do we create a new and radical project paradigm that can create successful projects? Today we are a movement of hundreds of passionate project people, and it grows larger by the day.

The formal part of Project Half Double was initiated in June 2015; it is divided into two phases where phase 1 took place from June 2015 to June 2016 with seven pilot projects, and phase 2 is in progress from July 2016 to July 2017 with 10 pilot projects.

The Half Double consortium: Implement Consulting Group is leading the project as well as establishing and managing the collaboration with the pilot project companies in terms of methodology. Aarhus University and the Technical University of Denmark will evaluate the impact of the pilot projects and legitimize the methodology in academia.

The Danish Industry Foundation, an independent philanthropic foundation, is contributing to the project financially with DKK 13.8 million.

About the addendum: We published the report “Preliminary results for phase 1” in June 2016 (Svejvig, Ehlers et al. 2016). It is time to follow up on the Phase 1 pilot projects and to document their development.

The purpose of this addendum is thus to document the development in the pilot projects from June 2016 to January 2017 with particular focus on the impact they have created.

This Addendum is a supplement and should be read in conjunction with the Phase 1 report, which will give the reader relevant further information.
The target group for this report is practitioners in Danish industry and society in general.

The report was prepared by a responsible editorial team from Aarhus University.
The addendum was prepared from December 2016 to January 2017, which means that late data about pilot projects from January 2017 is not included in this report. 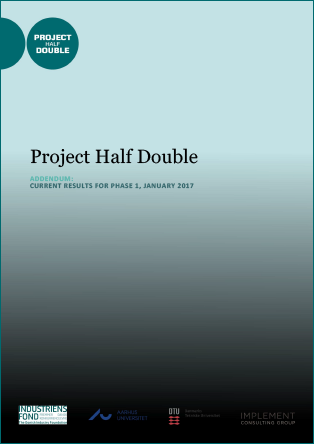