Project Half Double has a clear mission to succeed in finding a project methodology that can increase the success rate of our projects while increasing the speed at which we generate new ideas and develop new products and services. Chaos and complexity should be seen as a basic condition and as an opportunity rather than a threat and a risk. We are convinced that by doing so, we can strengthen Denmark’s competitiveness and play an important role in the battle for jobs and future welfare.

The purpose of Project Half Double is to improve Danish industrial competitiveness by radically increasing the pace and impact of the development and innovation activities carried out within the framework of the projects.

The formal part of Project Half Double was initiated in June 2015. We started out by developing, refining and testing the Half Double methodology on seven pilot projects in the first phase of the project, which will end June 2016.

The current status of responding to the above overall Project Half Double goal for the seven pilot projects can be summarised as follows:

- The Lantmännen Unibake pilot project was able to launch the first stores after 5 months, which is considerably shorter lead time than comparable reference projects, which have had a lead time of 10 months or more. This is in line with the overall goal of Project Half Double of delivering impact faster.

- Four pilot projects have the potential to deliver impact faster, but it is too early to evaluate. Some results might be evaluated in the second half of 2016, while other results take longer to evaluate (Coloplast, Novo Nordisk, GN Audio and VELUX).

- Two pilot projects will probably not be able to deliver impact faster, although it is too early to evaluate them. The evaluation of these pilot projects takes place over a longer period of time as it will take years before many of the key performance indicators associated with them can be evaluated (Grundfos and Siemens Wind Power). 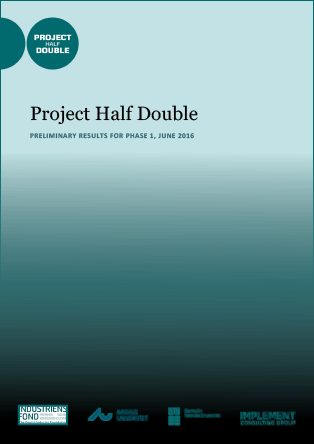 Details about this monograph