Agricultural crop residues are composed of both wet and dry streams, summing up to 3600 Mton year-1 (2013 estimate) of wasted resources globally. Besides that, around 3120 MTon year-1 (2017 estimate) of animal manure is generated worldwide. Nowadays, these agribusiness byproducts are underutilized and their conversion to liquid biofuels may present an untapped opportunity to provide the sustainability needed in sectors dependent on liquid hydrocarbons as an energy source.

This thesis focuses on understanding how synthetic polymers and agricultural waste interact under hydrothermal liquefaction (HTL) conditions, identifying opportunities and evaluating the engineering challenges to apply the technology in combined processing of waste streams. This work evaluates the possibility of recovering monomer-like structures from synergistic combined HTL (co-HTL) of synthetic materials and lignocellulosic biomasses. It also evaluates how biocrudes derived from highly synergistic co-HTL behave in downstream processing for biofuel production when compared to single-feedstock biocrudes.

HTL uses the reactivity of hot-compressed water in near-critical conditions to convert carbon-based materials into useful short chain organic compounds. The interaction of different feedstock materials under this condition allows a beneficial process efficiency and enlarges the opportunities to apply this process in waste handling scenarios.

Literature about HTL processing of synthetic polymers present significant achievements within the field, however the non-standardized approach for several studies lead to contradictory results, generating a knowledge gap between laboratory results and practical applications. Here, results of subcritical HTL processing are presented for the 12 most used synthetic polymers worldwide, both individually and combined with lignocellulosic materials. When evaluating synthetic polymers alone, it is found that materials containing heteroatoms in the backbone of the polymer structure are prone to hydrolysis under subcritical water, while carbon-carbon bonds are preserved. In practice, polymers derived from addition polymerization such as polyolefins and polystyrene do not depolymerize under subcritical water, while condensation polymers and others containing heteroatoms in the backbone are decomposed into molecules similar to their original monomers.

When these materials are combined with lignocellulosic ones, the synthetic parts containing nitrogen heteroatoms tend to synergistically interact with the organic-derived molecules and act synergistically increasing biocrude production. The reactivity of nitrogen species in synthetic polymers was directly proportional to the intensity of the synergies verified. The largest synergy identified was for polyurethane combined processing due to the presence of highly reactive amines bonded to aromatic groups. This finding led to an improved combinedprocessing of polyurethane foam and lignocellulosic materials, reaching pilot processing carbon and energy efficiencies of 71 and 75%, respectively.

The combination of wet and dry agribusiness waste fractions in HTL processing was evaluated using cow manure and wheat straw, respectively, as representatives. Their combination also leads to enhanced biocrude and carbon recovery during subcritical HTL processing through nitrogen species reactions with lignocellulosic-derived compounds. The formation of heteroatom-containing aromatics acts as a carbon carrier to the biocrude products. With this approach, pilot HTL processing carbon yields were enhanced from 40 to 60 wt%, while also providing superior total energy efficiencies (up to 50% based on organic input and output including heating utilities). This increase in carbon efficiency generates further benefits in the production of hydrotreated products, with biomass-to-hydrotreated products carbon balances increasing from 34 wt% for wheat straw in single HTL to 43 wt% in co-HTL of wheat straw and cow manure. The distillation of hydrotreated products depicts that the nitrogen-containing molecules tend to have higher concentration in heavier fractions, which may be an opportunity for more targeted processing of these fractions. Overall, production of biofuels enlarged via co-HTL mainly due to HTL superior carbon and energy yields.

Both synthetic-organic and organic-organic waste combined HTL, the reactions involving nitrogen compounds generate high synergistic effects towards biocrude formation. When increasing product stability through nitrogenated species, a consequent increased difficulty for their removal in following hydrotreatment oil upgrading is also verified. Nevertheless, the enhanced carbon and energy recovery and enlarged scope of HTL technologies attained
via combination of waste materials is an opportunity to take advantage of these sub-utilized streams. 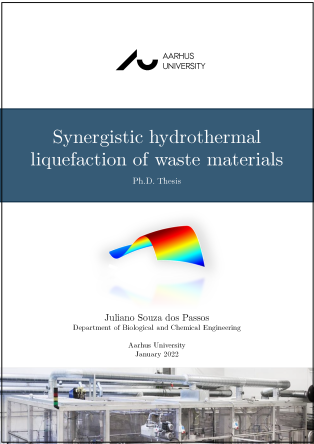