A Question of Participation – Disengagement from the Extremist Right: A case study from Sweden

Radicalisation, extremism and terrorism take places as responses to a broader societal context of macro social and political moves, both nationally and internationally. Engaging in an extremist group makes an individual changes, because he or she creates an identity relevant to the world of the particular group he or she is involved in. This causes some to need support after they disengage in order to deradicalise and develop new social skills and identities. The complex process that
follows their disengagement into the development of an alternative identity is the subject of this thesis. Several studies focus on the conditions under which individuals involved in terrorism disengage, providing insight into exit programmes
and the need for them, as well as discuss the different approaches used in a rehabilitation effort of (former) terrorists or extremists. This study moves a step further as the thesis adds insight into individuals’ disengagement and deradicalisation processes, by investigating the ways in which participation and social interaction embedded in the Swedish exit programme cause individuals to alter their identity. It thus provides a detailed analysis of the demanding psychological process, which former extremists go through, supported by the exit programme after they have left an extremist group. The study is anthropological and based on fieldwork carried out at EXIT, a Swedish organisation providing support to individuals seeking to leave the extremist right. EXIT uses former right-wing extremists as mentors, who, based on therapeutic dialogue and activities, support their mentees - right-wing extremists wanting to leave the extremist right - in developing alternative world views, ways of self-understanding and identities. 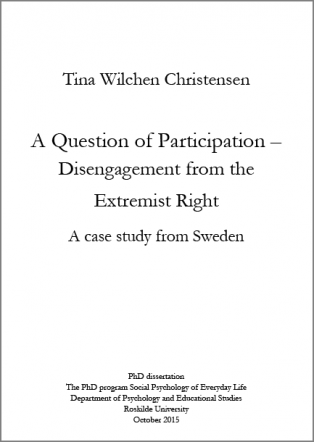