When piles are installed through soft, subsiding soils, a drag force is developed in the piles. The consolidation induced by e.g. lowering of the groundwater table or placing the fill around the piles causes settlements and thus a relative movement between the pile and the soil. As a consequence, negative skin friction develops in the upper part of the pile, which is resisted by positive shaft resistance in the lower part of the pile and the toe resistance. This phenomenon should be considered in the design of pile foundations. Previous studies on the development of negative skin friction have mainly been performed on driven piles installed in marine clay. Driven piles installed in gyttja, a typical of Denmark, have received little attention. Consequently, there is still insufficient documentation for the effect of bitumen coating in reducing the shear force between the pile and the soil in such ground conditions. Additionally, all the test piles in the reported studies were instrumented with spot sensors giving information only at discrete points. Therefore, the full distribution of strain along the piles was not possible to obtain. The present thesis investigates the soil-pile interaction in soft, subsiding soils using a distributed fibre optic sensing system, which provided a high spatial resolution. The development of and the controlling factors behind negative skin friction along uncoated and bitumen coated piles were of special focus. These objectives were obtained through a program of full-scale field tests, supplemented by laboratory soil-pile interface shear tests.

This PhD study has shown that the development and magnitude of negative skin friction was a function of effective stress and settlement. The soil-pile interface type had an impact on the magnitude of the shear stress in both full-scale and laboratory tests. The bitumen coating significantly reduced negative skin friction and its efficiency is related to the shearing rate. Finally, driven piles can be successfully instrumented with distributed fibre optic sensors providing continuous distribution of strain along piles. 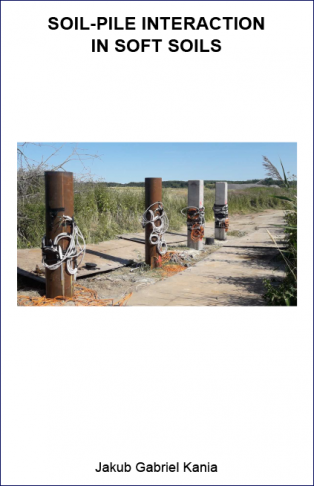