In the 21stcentury, business engagements are becoming increasingly global, and global teams are now an established form of organising work in multinational organisations. As a result, managing cultural diversity within a global team has become an essential part of ensuring motivation, creativity, innovation and efficiency in today’s business world.

Global teams are typically composed of a diversity of experiences, frames of references, competencies, information and, not least, cultural backgrounds. As such, they hold a unique potential for delivering high performance in terms of innovative and creative approaches to global management tasks; however, instead of focusing on the potentials of cultural diversity, practitioners and studies of global teams tend to approach cultural diversity as a barrier to team success. This study explores some of the barriers that cultural diversity poses but also discusses its potential to leverage high performance in a global context.

Our study highlights the importance of how team leaders and team members perceive ‘culture’ as both a concept and a social practice. We take issue with a notion of culture as a relatively fixed and homogeneous set of values, norms and attitudes shared by people of national communities; it is such a notion of culture that tends to underlie understandings that highlight the irreconcilability of cultural differences.

Applying a more dynamic and context-dependent approach to culture as a meaning system that people negotiate and use to interpret the world, this study explores how global leadership teams can best reap the benefits of cultural diversity in relation to specific challenging areas of intercultural team work, such as leadership style, decision making, relationship building, strategy process, and communication styles.

Based on a close textual interpretation of31 semi-structured interviews with members of global leadership teams in eight Danish-owned global companies, our study identified different discourses and perceptions of culture and cultural diversity. For leaders of the global leadership teams (Danish/European) and other European team members, three understandings of cultural diversity in their global teams were prominent:

1)    Cultural diversity was not an issue

2)   Cultural diversity was acknowledged as mainly a liability. Diversities were expressed through a difference in national cultures and could typically be subsumed under a relatively fixed number of invariable and distinct characteristics.

3)   Cultural diversity was an asset and expressions of culture had to be observed in the situation and could not simply be derived from prior understandings of cultural differences.

A clear result of our study was that those leaders of global teams who drew on discourses of the Asian ‘Other’ adherred to the first two understandings of cultural diversity and preferred leadership styles that were either patriarchal or self-defined as ‘Scandinavian’. Whereas those leaders who drew on discourses of culture as dynamic and negotiated social practices adhered to the third understanding of cultural diversity and preferred a differentiated and analytical approach to leading their teams.

We also focused on the perceptions of team members with a background in the country in which the global teams were co-located. These ‘local’ team members expressed a nuanced and multifaceted perspective on their own cultural background, the national culture of the company, and their own position within the team, which enabled them to easily navigate between essentialist perceptions of culture while maintaining a critical stance on the existing cultural hegemonies. They recognised the value of their local knowledge and language proficiency, but, for those local members in teams with a negative or essentialist view of cultural diversity, it was difficult to obtain recognition of their cultural styles and specific, non-local competences.

Our study suggests that the way global team members perceive culture, based on dominant societal discourses of culture, significantly affects the understandings of roles and positions in global leadership teams. We found that discourses on culture were used to explain differences and similarities between team members, which profoundly affected the social practices and dynamics of the global team. We conclude that only global teams with team leaders who are highly aware of the multiple perspectives at play in different contexts within the team hold the capacity to be alert to cultural diversity and to demonstrate agility in leveraging differences and similarities into inclusive and dynamic team practices. 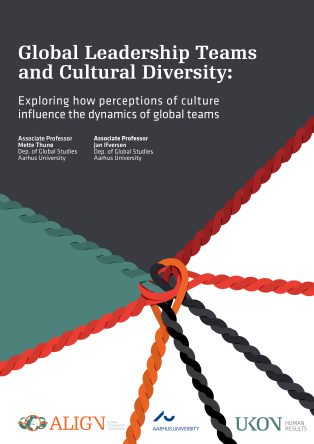